This is it, I thought. So this is how I’m going to die.

Panic clutched my heart—I could barely even wiggle my shoulders. Beads of sweat burst from my nose and forehead and a guttural cry surged from my throat: I can’t get … it … OFF! Wobbling half-naked in my bedroom, I was immobilized—by a couple of non-slip spandex bands stuck tightly around my shoulders and two sweat-soaked foam pads covering my face, threatening to suffocate me. I imagined the news headlines: Woman Found Dead in Denver Apartment, Stuck Halfway Out of Her Sports Bra.

How could this thing—which, in some ways, represents freedom to move and play—also be such a ridiculously cursed torture device? I breathed deeply to calm myself, tucked my shoulders in tightly and puuuuulled. Gah–yes! I would live to see another workout. This was not the first time I thought I might die of asphyxiation by Moving Comfort. And, sadly, not the last.

Like, staying warm after or during a cold-weather run. Seriously. Anyone who has a chest of a certain size has probably faced this dilemma: Choosing a sports bra without any extra modesty padding, you’re likely accepting the proverbial “headlights” look. Nipped out, if you will. I wish I could say it’s not that big of a deal, but it’s not that simple. Most of us with boobs are painfully aware that simply owning a pair is often enough to gain unwanted attention or comment from passersby on the street. Turning the high beams on, so to speak, doesn’t usually do anything to help that situation.

But the alternative isn’t always better—I call it the Alpine Death Sponge. Let me explain. Most of us outdoorsy folks live by a couple of cardinal rules when dressing for cold-weather exertion: 1) Start cold, and 2) Cotton kills. They should also add, “Don’t wear a sponge.” But a sponge is exactly what most sports bras become if they have any sort of modesty padding. As you’re running or biking uphill, your core temperature rises. All the rest of your expensive breathable, wicking, outdoor clothing is doing its high-tech job and keeping your body nearly dry, your temperature nicely regulated. Except—the Alpine Death Sponge. Because you’ve opted for a bra with some padding to hide your headlights, you are now carrying the equivalent of two sopping kitchen sponges against your chest. When you stop moving in the cold, the clock starts ticking—and if you don’t either remove the saturated sponges or add a much warmer layer immediately, you’ll quickly feel like you’re wearing two frozen chicken breasts inside your shirt.

No matter your chest size, sports bra life is rife with struggles. One day, getting into the car after a quick, sweaty lap up and down the local ski hill, I remarked to my girlfriend—who has a slightly larger chest than I—how quickly my Alpine Death Sponge was chilling me. She looked at me like I’d spoken a foreign language. Padding? Like, extra padding IN your bra? The idea of adding any extra padding to the size of her chest mortified her. In the practicality showdown, the modesty of the extra padding lost. 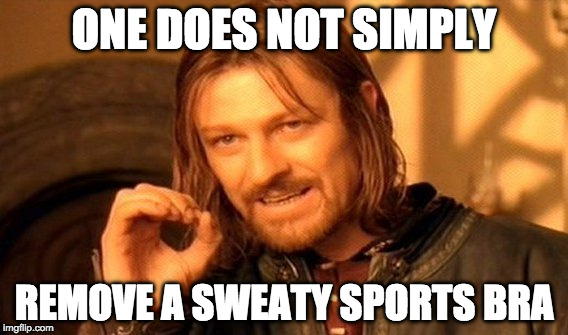 Maybe the smaller-chested folks have it easiest. After all, they’re the main beneficiaries of the trend of sports bras with delicate, fashionable straps in cute spiderweb and sunrise patterns. A moderate C cup myself, I once imagined that a super hip, high-end sports bra from Lululemon might relieve me of my Alpine Death Sponge woes. I walked hopefully into the dressing room with a handful of neon and striped bras with so many slender straps I was afraid I might need an instructional video on how to put them on. Ten minutes later, I regretfully placed each of them back on the sales rack. Even with our wild advances in structural engineering technology, most of the bras one might construe as sexy still cannot support anything heftier than a B cup for much more than a tranquil morning of yoga or a walk to the coffee shop. It seems that support + modesty still = Alpine Death Sponge.

On top of that, whether you’re a AA or DD, you’ve probably suffered at least one acute case of what I call MCSC—or Maximum Chest Squeezing Capacity. You don’t need to log on to WebMD to figure that one out: it’s the pressure threshold where a sports bra wearer simply cannot. Take it. Any. More. The threshold varies from person to person, and activity to activity, and is directly affected by the tightness of bra and sweatiness of the material. For those who’ve never experienced MCSC, it’s very similar to the feeling of sitting down in your car after a long day of skiing where you become extremely, achingly, suffocatingly aware of how tight your ski boots are and can’t get them off fast enough. And literally, you can’t get them off fast enough, because it always involves intense pulling, wriggling and tugging.

Thankfully, MCSC is often followed immediately by the euphoric sense of release associated with PESR, or Post Extreme Squeezing Relief. PESR, which only occurs when a sports bra is fully removed, is usually accompanied by groans and sighs, and sometimes profanity. The amount of profanity released during PESR directly correlates to the amount of time that passes between the peak of MCSC and the moment the bra is fully removed from the body.

Despite the pain and frustration of MCSC and the dire effects of Alpine Death Sponges, most of us continue to don sports bras regularly, like people stuck in bad relationships. We put up with the compression and suffocation. We swear like disdainful sailors when we take them off, but the next day we’re stuffing ourselves back into these contraptions. Why? Because, ultimately, it really does lead to freedom.